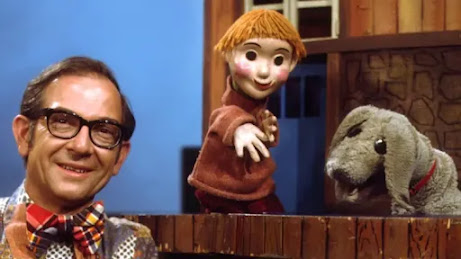 I am the youngest of six children. My mother was, no doubt, a little weary by the time I came along. I remember that even though our family's TV received only two channels, CBC and CTV, I watched quite a bit of both channels. When I was small, nearly every morning I was not in school I spent on the living room sofa being gently entertained by Mr. Dressup, The Friendly Giant, and Sesame Street. Halfway through Sesame Street, one of our metal TV trays would be set up and my mother would deliver me lunch, usually a grilled cheese sandwich with a side of ketchup. Sometimes a bowl of soup, too. Lunch would be followed by quiet time on my bed with a book. I presume I was sent outside to play after that, because I remember being outside a lot, too. On school days I would often watch Happy Days with my elder siblings. Sunday evenings we all watched The Magical World of Disney and The Beachcombers. The Irish Rovers also, but I can't remember which night they were on.

In the days before home video a movie might be shown on TV about three years after its release, and always with commercials. On the commercial breaks my mom would call out, "Okay, go get your pyjamas on!" and we would race to be back before the movie or TV show resumed. On the next break she would say, "Go brush your teeth and wash your face!" In summer, she would add "Go wash your feet!". The stakes were high during Primetime, especially with only one bathroom in the house. Every show not a rerun was like a live performance. None of your 'pauses' and 'plays' of today's streaming services and PVRs. My parents were big fans of The Smothers Brothers and Wayne and Shuster, but the humour often flew over my head. I tried so hard to get the jokes, and laughed along as if I did. We weren't allowed to watch soap operas in our house, but when I was sick and nothing was on, I was allowed to watch Coronation Street. It bored me to tears. I'm sure my mom knew it would, and that I would eventually turn it off and read. I remember her often reading while we watched TV, but like most moms she could keep an eye on everything even when she was reading. She was super critical of advertising and marketing. She would argue out loud against the claims of toothpaste and cigarette commercials, trying to detox our sponge-like little minds from the poisons of capitalism. I can still hear her voice even now when I encounter a commercial which makes elaborate claims over a product's efficacy or promotes the 'luxury lifestyle'.

I slept over at my friend Antonia's house nearly every Friday night when we were preteens. Her family had cable and thus Saturday morning cartoons. Wonderfriends and Scooby-Doo were my favourites. As I transitioned into the teenage years and started babysitting I took advantage of the bounty of Cable TV. Once the kids were in bed and my homework done, I sat glued to Knight Rider, Magnum PI, Rockford Files, and the 'must see TV' of NBC: The Cosby Show (I know, I know), Family Ties, and Fresh Prince of Belair were among my favourites. Some time when I was in high school reruns of those three sitcoms made their way over to CTV. When I didn't have extra-curricular activities after school, or planned hangouts with my friends, I would come home, make a big bowl of popcorn and unwind in front of our little black and white portable.

As VHS's became common my friends and I discovered Monty Python and movie nights which involved a trip to the video store and the choosing of one to three films to rent for the evening (but this is a post about television, not movies, so I will stick to that topic). My newly acquired brother-in-law introduced my family to some great British comedy shows on video, too, like Blackadder and Mr. Bean. As I developed academically I became interested in news stories. I followed Terry Fox and Rick Hansen, Election nights, and the Calgary Olympics, feeling a part of something great in my own country. Growing up in a small town nowhere near a big city, TV for me was a link to the big possibilities of life. I became a devotee of music shows like VideoHits and Good Rockin' Tonight 'with Terry David Mulligan' (That rolls off the tongue, doesn't it?), and the National Ballet's performances filmed for CBC.

When I was in college and still living at home, CBC borrowed a mystery series from the BBC called Inspector Morse. My parents soon became hooked on it. Up until that point my experience with murder mysteries was limited to plays like Agatha Christie's The Mousetrap, which I absolutely loved, and some exposure to Sherlock Holmes stories. Inspector Morse was something new and different, each episode one and a half hours of puzzle solving poised against a backdrop of beautiful English countryside and the hallowed halls of Oxford University, accompanied by a gorgeous classical music soundtrack. Needless to say, I joined my parents for most episodes of the show and I have been a fan of the murder mystery genre ever since, although, in my opinion, Inspector Morse has not really stood the test of time.

When I moved out, got married and had children of my own, watching TV was the main activity my brain-dead self engaged in once the kids were in bed. I loved shows chock-a-block with quirky characters and clever, snappy dialogue like Northern Exposure and Gilmore Girls. Period Dramas such as Jane Austen adaptations were also high on my list. As the kids got older we watched TV as a family, but please don't ask me for a detailed list of what we watched. That part of my life is a blur. America's Funniest Home Videos and Saturday Night Live were in there somewhere. My eldest horse-crazy daughter and I watched Heartland for a couple of seasons. We also rented a lot of movies and borrowed videos from our local library.

In the modern world of streaming services we have way too much choice of shows to watch on our televisions. My household has basic cable, Netflix, and Amazon Prime with Acorn added on. I could spend twenty-four hours per day watching TV and still not even put a tiny dent in all that is on offer - a far cry from my two-channel childhood. I probably still watch a bit too much TV, but honestly, I find it as I have always found it: relaxing and often transporting. When my husband is home he enjoys watching sports and 'surviving in the wilderness' shows like Mountain Men and Alone, which is generally when I read a book. He also likes mysteries a lot, so we watch those together when we can. Our neutral ground on days when we are tired, or when the weather is bad, is HGTV and the like. Boring, yet satisfying, predictable yet somehow addictive, renovation and house-hunting shows are the ultimate 'Veg TV'. (So are Hallmark movies, but that's a topic for another day.)

I have always read a lot - my mother was a champion of reading - but I was, and always will be, like many of my Generation X, a TV kid, even if I never once set eyes on Captain Kangaroo.