Going Against the Current 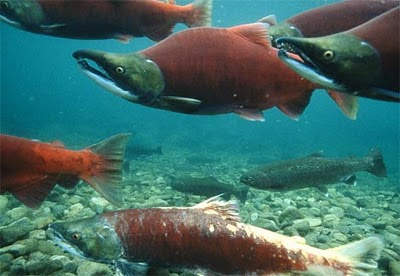 While I spent much of Sunday in happy solitude baking pumpkin pies and apple blackberry crisp for Monday's Thanksgiving dinner, my family took a drive out to the salmon spawning channels at Weaver Creek, which is a truly lovely spot near the Chehalis First Nation Reserve on the Harrison River.  We try to get there every year, but this year my husband, always the naturalist, was extra motivated since the Sockeye salmon have returned in record numbers after the experts' initial gloomy prediction.  No one seems to know exactly why the Sockeye run is so great this year, but one thing was clear when my family returned home to report on their outing:  the amount of tourists at the spawning channels almost equalled the number of fish.

The spawning channels are man-made shallow switchbacks with gravel bottoms and rows and rows of trees for shelter and shade.  A visit to Weaver Creek is always a pleasant way to spend an hour or two, even though the scene is a bittersweet one with the red and green fish struggling against the current to return to their birth place, many of them dying along the way.  The walk from the parking lot takes visitors alongside the channels and ends up at the creek where the salmon must leap several feet over a manufactured waterfall called a fish ladder to make it into the channels.  The reason for the tough entrance exam is to maintain as strong a species as possible; strong fish create more strong fish.  It is quite the scene to watch the salmon leap and violently shake their muscular tails in order to gain the height required to make it into the first tank.

While I enjoy watching the concentration of fish in the channels, eventually I must always go over the bank, away from the tourists and down to the actual creek.  Sometimes, depending on the time of year, there can be dead, mouldering fish all over the creek bank, but if we are early enough in the season we can enjoy the quiet fall scene without the carnage:  the meandering creek with water rippling over boulders strewn here and there, the natural riparian plant life dressed in its fall finery, and the occasional languishing salmon that has managed to make it past the weir, which is designed to keep them out of this particular part of the creek.

The huge sockeye run this year had almost everyone I know here out fishing for their allowable daily catch of two salmon during the short open season, and freezers all over the Fraser Valley are brimming with frozen fillets.  A group of boys would cycle past my house every day after school with fishing rods in hand, and joy on their faces.  The mighty Fraser river was packed with boats, nets, and people in hipwaders, and the rural roadsides were lined with vehicles.

The local Stolo First Nation people value the salmon above all other creatures.  From infancy they are taught to revere the cycle of the red fish.  Their artwork is full of depictions of this cycle and its importance spiritually and literally to their culture.  A native artist once brought a cooked salmon to his art opening and urged me to try the salmon roe.  I tasted the small red caviar and an incredibly oily, fishy sensation went down my throat.  I can't say I enjoyed it, but I could see how it would be the food to eat when fattening up for a cold winter.

When we lived on Vancouver Island I learned to bake a stuffed salmon and did so fairly regularly.  Pink salmon, a variety light in colour and less rich than other varieties, was sold in season for nineteen cents per 100 grams (about a dollar a pound) and was incredibly available, so it seemed the thing to cook.  I have never loved salmon, though.  Not like so many other people.  When I was a student, one of my roomates was a fish biologist with constant access to free salmon.  He barbecued it with a teriyaki marinade, and it was good, but I think too much of a good thing is well, too much.  I have been to several outdoor picnics that involve cooking large fillets of salmon skewered on a long stick and placed right next to a fire.  While the guests raved about the fish, I ate it, thinking, "Yeah, it's salmon."

My friend Bridged belongs to a prestigious fishing club in Campbell River called The Tyee Club.  Members must use only a row boat to fish from, and every year the largest salmon caught (they are called Tyee due to their enormous size) is dipped in ink and pressed onto paper for an imprint.  Bridged won the trophy a few years ago and now, an enormous framed print of a thirty-odd pound fish decorates her house's entrance.  She also ended up with a truck load of smoked salmon as she was allowed to keep the fish for eating.  She could not have been more thrilled, but then, Bridged grew up fishing for and eating salmon.  Maybe that is my problem:  I didn't grow up on the Coast, relying on and thus revering The Sacred Red Fish.

I confess I haven't got a single salmon in my freezer.  We are not a fishing family, and when my eldest daughter eats fresh salmon, particularly Sockeye, she usually becomes ill; it is quite rich.  I spent some time in the grocery store the other day wondering if I should buy a three pound Sockeye for fifteen dollars.  I was feeling badly about not taking advantage of the big salmon run and no one had offered me a salmon from their own catch (not that I asked), so I hemmed and I hawed, I considered my husband's opinion (which was that we didn't love salmon enough to pay fifteen dollars for one), and then I walked away from the fish section.  My freezer is already full of beef and chicken from a local farm and I try to make half of our meals vegetarian, so we can only eat so much meat, fowl and fish.  This makes us somewhat of an anomaly around here; to live on the Coast is to eat freshly caught salmon, and lots of it.  My family's 'wild pacific salmon' comes out of a store-bought tin, already caught, gutted, cooked and with no bones to choke on.  I generally mix it with bread crumbs, egg and spices to make salmon croquettes or a type of salmon wellington with mashed potatoes as a cover instead of pastry.  It doesn't taste quite so 'fishy' that way.

Personally, I am happy for all the local people who rely on their yearly catch of salmon.  There is a bounty this year for eating fresh, for freezing, canning in jars, drying, smoking and making into a rich delicacy called candied salmon.  While I am full of gratitude for a good salmon run for their sakes, I am resigned to cheering from the sidelines...and hope the good harvest makes for good prices on tinned salmon this winter.

The photo is by Peter Essick for National Geographic.
Posted by Rebecca S. at 12:39 PM