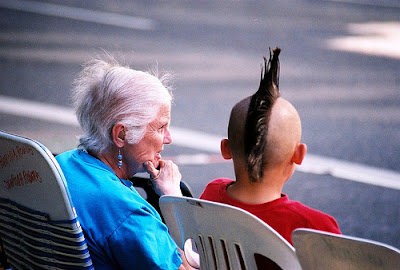 It must be a challenge sometimes for the elderly to stay hopeful in this world, especially when so many of them watch daytime television. If the world were truly represented by what is available as news and 'reality' TV, even Pollyannas would lose their irrespressible optimism. The world has changed a great deal over the past century, and those who have been through one or both of the Great Wars really must feel as though they have seen all there is to see. The advancements in technology alone are enough to make one's head spin; for example, cable television used to require only a cable plugged into the wall and voila! Now, it requires research and excess equipment, decisions about PVRs and digital boxes, and mysterious contracts in a language hitherto unfamiliar to most people.

Thanks to the digitally shrinking globe we are surrounded, bombarded almost, with the events of the day from around the world. It takes a bit of detachment and a philosophical attitude to keep everything in perspective. I can see how an elderly person might be tempted to despair if all they see of the younger generations are bad news stories and the baggy-pants swagger of the texting, smoking, swearing young who hang around outside the shops of our downtown streets.

Some good friends of ours, Jim and Diane and their two children, live on a farm just outside of town. On their farm are two houses, theirs which they built and a larger one which was once the family home of Jim's parents. A few years ago, Jim and Diane renovated a section of the house for their elderly friend, Ella. Ella is now 95. She cooks for herself, still drives her red sedan, and likes things around her, home and garden, arranged just so. Jim keeps her house warm by tending the fire and looks after any maintenance issues which may arise. Most of Ella's family live in the U.K. but she is by no means friendless. She enjoys company but like any elderly person, in small doses. She enjoys the view of mountains and fields in the distance and the pond with its bird life only a few meters from her kitchen windows. Wonderfully, Ella spends time most mornings playing one of two pianos in the spacious, light-filled living room of her apartment. Ella has maintained her amazing sight reading ability, and having heard her play once or twice, I can attest to her tremendous talent.

I have had a few conversations with Ella, mainly outside the greengrocer we both frequent, and while she is sharp and quick-witted, she has gained a rather jaded view of mankind in his present form. The world is often referred to as 'going to hell in a handbasket' or something like it. Families don't stay together anymore, children are badly behaved and have no attention span, no-one has any discipline, people are far too materialistic, politicians are evil, crime is rampant, life used to be simpler, life used to be better. She subscibes to cable via a sattelite dish, and enjoys television which I will admit can be fine company depending on the show, but perhaps, as stated above, it can be blamed for some of her despondency. I can hardly blame Ella; I sometimes get fed up with the world as well, but perhaps my relative youth and health work in my favour and I can never despair for long. My children and their friends and cousins with their talents, their energy and their optimism serve as examples (most days) of why there is also hope for the future.

On an evening before the Christmas break, our local high school put on a band concert. As has been the tradition for two years now, my violinist son Galen played a solo sometime during the concert. This time he teamed up with his pianist friend, Kieran to play a duet of Vittorio Monti's Czardas. Unbeknownst to us, while they were rehearsing during their lunch hours in the band room, they were concocting a slightly comical rendition of the piece. They realized that they had to turn their pages at precisely the same moment in the piece, and rather than appeal to friends to turn their pages for them they decided to perform the song in a style similar to the great classical music comedien Victor Borge. When it was time to turn their pages, they would stop, turn them together, then start up again. What made it so funny and surprising for the audience was the fact that they were so skilled at their instruments, but willing to show the lighter side of 'serious' music.

Diane and Jim happened to be at the concert that night and thoroughly enjoyed the boys' performance. A week or so later I received a call from Diane. Apparently, Ella had recently been partnered with a student from the local academy of music. The student came out to Ella's house and attempted some duets with her. For whatever reason the partnering was not a success, and the search was continuing for a suitable partner. And that is where Galen came into the picture. Would he be interested in playing some duets with Ella, whom he had met once or twice? Diane had heard Galen at the concert and thought, 'aha! There is the perfect partner for Ella.' Should she approach Ella with the plan if Galen agreed to it?

Would you like to know the answers to the above questions? Read part two of this story. In the meantime, here is a lovely video of Victor Borge and  violinist Anton Kontra performing their rendition of Czardas:

As for the photo above, unfortunately, I can't find out who took it. I found it on a careers website.
Posted by Rebecca S. at 7:12 PM

Email ThisBlogThis!Share to TwitterShare to FacebookShare to Pinterest
Labels: technology, teenagers, the arts