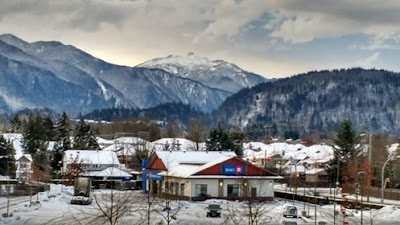 Last evening, about nine o'clock, we heard a light tapping on our apartment door. My husband, just having arrived home two hours previously from his new job in the mountains where he lives part time, answered. He stuck his head out the door and kept his body behind it, shielding me from view - I was sitting shirtless with a heating pad on my chronically sore back. I heard a light, female voice asking if we could 'keep it down a bit'. Keep it down? We were watching an Australian murder mystery on Knowledge Network and our fifteen year old was having a bath. I'm not sure how much more 'down' we could keep it. I heard my husband respond with as much, and then the woman's response, "Well, try to keep it down anyway. We don't usually mind, but we have a guest who is very sensitive to noise." My husband closed the door and came over to tell me what I had already heard.

"How old was she?" I asked. He said she looked about twenty-five or so, and that she lived in the apartment below us. My husband was quite angry by the intrusion and the suggestion that we were being loud. I was, true to form, upset and sensitive to the idea we could be bothering the people below us with our day to day activity. I consider us fairly quiet people, especially when most of the time it is my daughter and me alone in the apartment. I would never go upstairs, as much as I would like to some days, and knock on the door of the young couple's apartment above in order to say, "Hi, I was wondering if you could get a new bed. Your very squeaky love-making is keeping me up at night. Also, your singing and terrible keyboard playing in the middle of the night is obnoxious. I love children, so I don't mind your toddler running back and forth across your apartment, but I think maybe you should take him to the park more often." I would think such an action incredibly rude and insulting. Of course, if I had a legitimate problem with the level of noise I would contact the building manager and make a complaint.

We have lived in this apartment building in our mid-sized city for nearly six months now. The general noises of life are to be expected from our neighbours. We all live together in a sense. Why not live and let live? The Shoppers Drug Mart in the plaza next door sells ear plugs. I lived here only a week before I bought myself a couple of sets. I rarely use them now, except in extraordinary situations like when the beeping and scraping of the snowplow would start at 3:00 a.m. in the plaza parking lot over which our windows look out. One gets used to the ambient noises at night. Mind you, I am nearly twice the age of our downstairs neighbour. I have lived in many homes of all types over the years, in a diverse set of environments. Perhaps the benefit of my life's experiences gives me a more tolerant view than I may have possessed at twenty-five.

This morning, I got up and walked softly across the bare floor to our kitchen. I wrapped the coffee grinder in a blanket, as I do when others in the house are sleeping, and ground my morning coffee. I was aware of every step, every move. I know this hyper-sensitivity to my own noise-making will subside. Until then, I will miss the freedom of living life without worrying about the residents below me.

P.S. The photo is of our view of the plaza over which I gaze at the mountains.

P.P.S. I have returned to blogging after a two year hiatus. I suppose I have things to say once again.
Posted by Rebecca S. at 9:39 AM 10 comments: