A Harrowing Tale of Halloween Hijinks 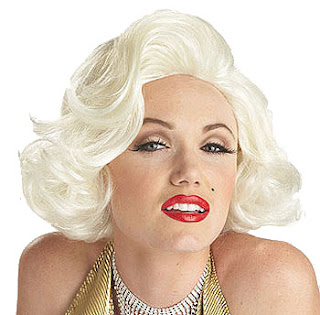 In my adult life have dressed in many different Halloween costumes, an evil nurse, a go-go dancer, a fortune teller, The Burger Queen, etc., but none of these costumes attracted attention like one in which I attended a dance in the late 1980's.

I have never been what you would call a 'Marilyn Monroe' type. I am better known for my glowing health, a cheerful spirit, and good teeth.  That must have been why, when I showed up to the party dressed as a politician who shall go unnamed, I got the reaction I did.

Everyone loved to hate this particular politician, especially in my town.  She had an awful nasal whine, an uptight persona, a full head of dyed blonde hair, and her government had been responsible for closing down our university in the mid 1980's. I couldn't think of a better costume idea for the dance at the Student Union Building, and I put together an outlandish outfit for the occasion.  A good friend of the family had an enormous costume collection, which I had borrowed from several times.  I decided I would be the politician attending a ball to meet the Queen and went all out.  I chose a long sparkly sleeveless dress which had been tailored for a well-endowed woman and so I stuffed the chest area to the point of capacity.  I wore long white gloves and plenty of gaudy jewellery, strappy silver sandals, and a poufy blonde wig.  I wore an inordinant amount of blue eyeshadow and red lipstick and removed my glasses.  As I left the house I took a last look at my reflection and decided I looked absolutely hilarious.  I had just endured a heart-breaking but much needed break-up with my boyfriend, and my sisters and I were fully prepared to enjoy ourselves that evening.

When we arrived at the S.U.B. we were greeted by Didier, a Swiss-French art student whom I had known for a year.  Fully prepared to be received with a laugh, I entered the room in character and bought my ticket from Didier.  I was not greeted with a laugh and a good-natured 'great costume!', no.  Instead, Didier looked me up and down with a bit of a leer, and said quietly, "We must dance later."  Hmmm.  Not quite the reaction I was expecting, so I raised my eyebrow at him and moved on.  I had barely had a sip of my drink when someone asked me to dance.  Never before had I been asked to dance as many times as on that night.  Most of my partners were good fellows that I had met at least once, and I had a super time, but I maintained a slightly uncomfortable feeling that they had forgotten who I really was.  I never really knew if it was I they were asking to dance, or my alter ego, 'Grace', so when one of my dance partners asked me out on a date for the following night, I declined.  I wasn't ready to be 'out there' in any case.

When I went home and removed my costume, I felt relieved.  For a short time I had felt what other women like the real Marilyn must have felt, and I was glad to be me.

Okay, so my tale is not exactly 'harrowing', but it is a little unnerving.  And I like alliteration.

The photo is not the real Marilyn Monroe of course, but is a model advertising a 'Marilyn' wig.
Posted by Rebecca S. at 6:29 PM