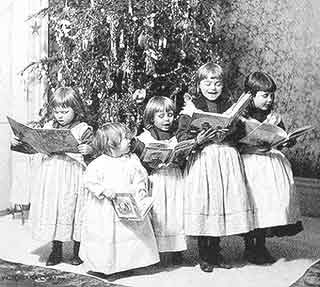 I did not want to go with the school choir on their day tour of senior's care homes. I did not. I was tired and had a list of chores and errands to do before hosting Saturday evening's dinner party. The acappella group I sing with had worked hard for weeks to prepare for our own performance at the previous evening's choral festival. Our performance had gone well, but all during the night, my mind had sung our carol over and over without my permission:

That is always the way after a performance. Nevertheless, I had woken up feeling like something the cat dragged in. Ugh.

I had told my daughter's music teacher that I would come along on the tour only if not enough parents stepped forward, that I was really busy. She phoned me the day before the tour and asked me to come. I couldn't say no. The next day, Katie and I got up a bit earlier than usual, made our lunches for the day, and packed our bags with some activities to do on the bus between care homes. When we arrived at the school's music room we learned there had been a mix-up with the buses so we would have to walk to our first care home. It was a sunny, windless, brilliant day with frost on the rooftops and lawns, so I welcomed the walk of several blocks, and I think it was a good way to start the day for all the children, too.  With one of the parents carrying the keyboard, we paraded down the street in a long, jolly line. The first care home was brand new and quite elegant with chandeliers and Victorian furniture, high ceilings, sweeping staircases and lush carpeting. The choir performed a half hour set for a large group of residents in varying states of awareness and several cheerful and attentive staff members, and then it was time to leave for the next town. A bus had appeared out of thin air, it seemed, and we were off.

We visited three more care homes that day, none as fancy as the first. The children had been informed of the kind of audience they could expect, and were asked, instead of shaking hands with the seniors who were vulnerable to the kind of germs children are bound to carry, to go around and wish them a good day and a Merry Christmas after the set of carols. The choir did their best, but by the third care home the kids were visibly drooping. The rooms were overly warm, the air stuffy and they had sung the same set of songs all morning. The other parents and I made hand signals from the back of the room in an effort to encourage the kids to sing out, and at least cover their mouths when they yawned. Fortunately, the next item on the iternarary was lunch and a runaround in a nearby playground, which was most welcome for all of us.

I was moved several times that day by the reaction of many of the elderly audience members. While most of them merely listened or slept through the performance, there would always be a few singing along, usually quietly, but with sweet enjoyment. Most of the songs the choir sang were fairly typical choral arrangements of songs written for school choirs and not immediately recognizable to most people, but there were a few familiar verses like The First Noel, which the director would invite the seniors to sing. On the bus between care homes, the kids would belt out Santa Clause is Coming to Town, Rudolph the Red Nosed Reindeer, Jingle Bells, and all those old favourites, but by the third care home their enthusiasm was waning for their prescribed set list. Another mom suggested to me that maybe the choir should mix in some fun carols with their set list. She must have said something to the choir director, too, because that is exactly what they did. The kids were delighted to mix up their last set with some new/old songs, and the seniors loved it, too. I particularly recall two elderly residents, who sang at the top of their voices whenever something familiar was sung by the choir. One was a lady who would sing loudly in between efforts to attract the attention of a rather severe looking care aide who would instruct her to 'sit down!', and the other was a tall gentleman in a reclining wheel chair. With his head dropped down on his chest and his eyes closed, he sang with the voice of someone much younger. Even during the unfamiliar songs he would find a single, repeated word and sing that word out whenever it came up. It was hard not to develop a few tears at such an endearing sight, and I found I was glad I had put aside my relentless to-do list and come.

There was something Dickensian about touring those care homes and singing Christmas carols (the parents sang too) for the elderly and infirm. I sensed a warning to look after myself and my family well, to never forget that I, and my husband too, would eventually grow old and dependant upon others. I thought how important it was to treat others as I wished to be treated, and to always remind my children to be kind, caring, generous, tolerant and considerate of others. I am hardly an Ebenezer Scrooge, but I can learn, as he did, and pledge to "honour Christmas in my heart, and try to keep it all the year. I will live in the Past, the Present, and the Future. The Spirits of all Three shall strive within me. I will not shut out the lessons that they teach."

The above photo was found at Victorian-Era.org.
Posted by Rebecca S. at 2:30 PM